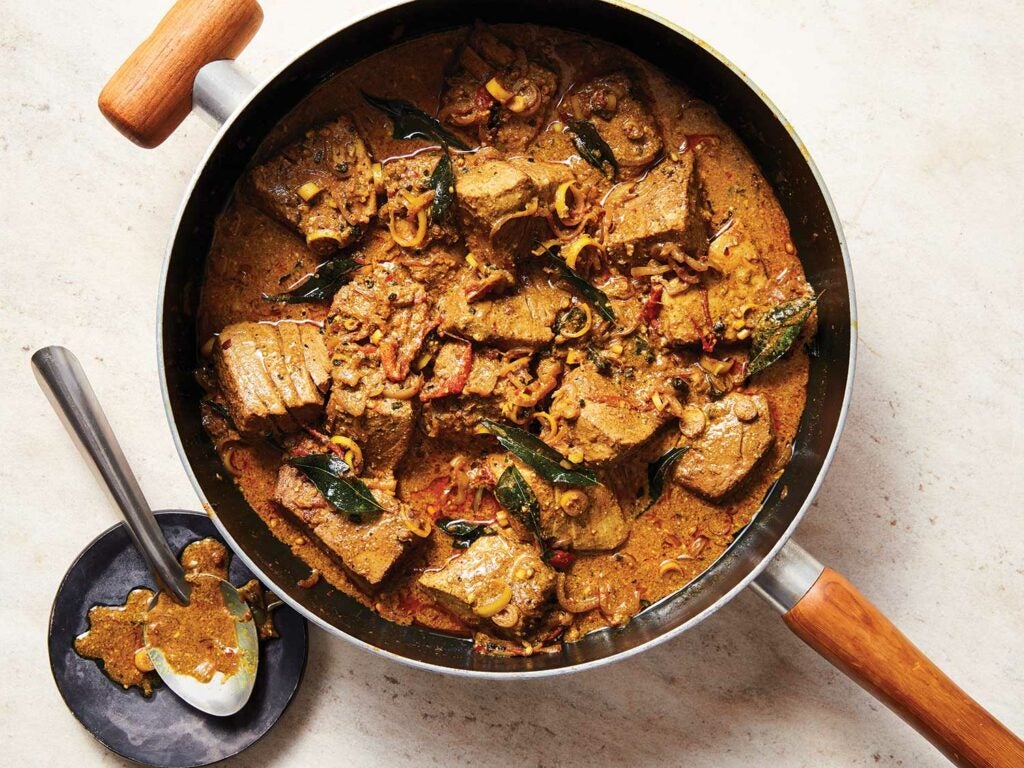 Prepare to fall in love with Rotis. Roti is a sort of Sri Lankan flatbread that comes in various shapes and sizes and can be eaten for any meal, even dessert!

The flavor of pol Rotis is similar to that of naan bread. They’re prepared with wheat flour, scraped coconut, and served warm. Rotis are most commonly served with curry curries, but they can make a terrific street food snack on their own.

Rice and curry (and papadums!)

Sri Lankan curry and rice is the island’s national cuisine, and it’s commonly served for lunch. There are so many curries to pick from that you’ll never run out of new dishes to try. Dahl, chicken, fish, and Gotu kola Sambol are the most popular. Restaurants frequently provide buffet-style meals, allowing you to sample as much as you like and explore a variety of specialties.

Hoppers can be served sweet or savory. Egg hoppers are a must-have on every Sri Lankan morning menu. A ladle of rice flour and coconut milk batter is cooked in a small wok for a few minutes before being decorated with sugar or salt, onions, and chilies, much like a pancake.

The ambul thiyal – sour fish curry – is top of Sri Lanka’s most popular curries. This recipe came up to preserve fish in Southern Sri Lanka. Garlic, turmeric, black pepper, and cinnamon are sautéed with cubed fish, generally tuna. The secret ingredient in this meal is goraka, a tamarind-like fruit that lends the dish its peculiar acidic flavor when dried.

A cup of Ceylon tea is a must-try on every vacation to Sri Lanka. The tea is usually served black with milk and kithul jaggery – a cube of refined brown sugar – ideal for individuals who want their tea sweet. To fully appreciate the taste of the pure tea leaves, try your first drink without any added ingredients.

Kola Kana is a traditional green, herbaceous preparation that is said to aid digestion, boost immunity, and lower cholesterol. This age-old energy booster is nearly like herbal porridge and may be served in a bowl or glass. This nutritious blend is traditionally consumed on an empty stomach before breakfast and it causes a cooling effect on the body, ideal for those hot monsoon days!

‘Toddy’ is a short local alcoholic drink derived from the sap of palm trees in the early stages of fermentation. ‘Arrack’ is a refined and fermented variant of ‘Toddy.’ ‘Arrack’ is Sri Lanka’s national spirit and is considered to be one of the world’s oldest distilled spirits, dating back to the 5th century AD. It’s finest served blended with local ginger ale for a nice refreshing cocktail. ‘Toddy tapping’ is the procedure of collecting the sap. The toddy tapper climbs the coconut trees and travels between them on weathered tightropes, picking the coconut blooms when they’re ready to be harvested.

King coconuts are native to Sri Lanka and are packed with tasty and healthy elements. Markets and street sellers will have lots to offer, ready for you to taste. Remember to avoid using plastic straws! They may cut a hole in the top of the coconut large enough to sip from directly. Coconuts play an important role in Sri Lankan cuisine, from frying vegetables in coconut oil to utilizing coconut milk to temper down the spices in curries and using coconut meat to produce spicy sambol or as a bread and rice accompaniment.